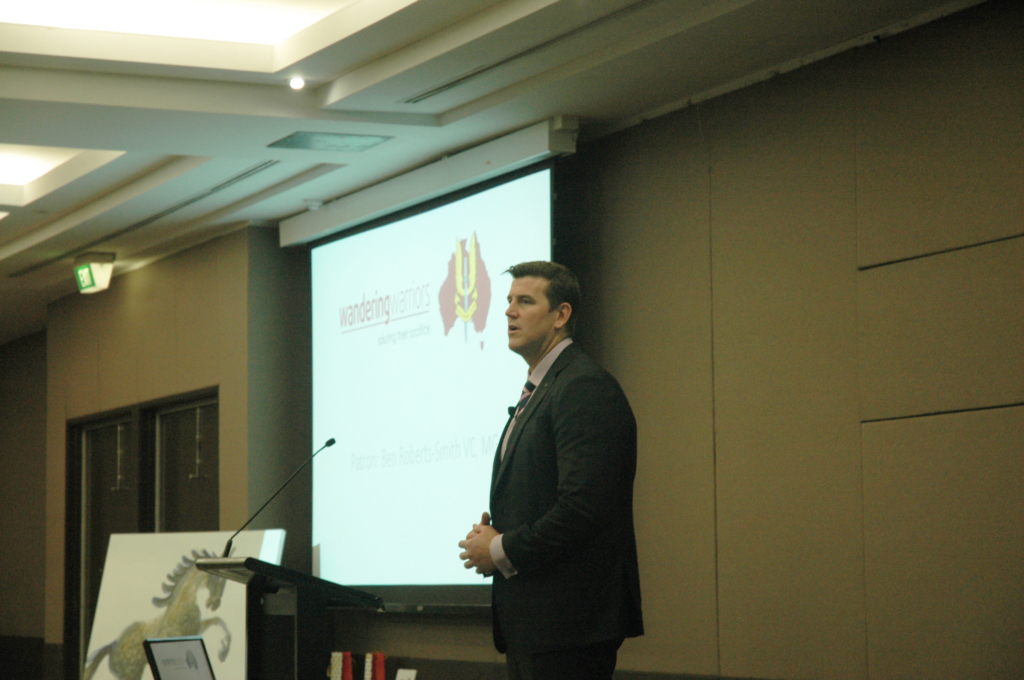 A large audience at the Mercure Brisbane last Wednesday heard Ben Roberts-Smith recount the battle of Eastern Shah Wali Kot, where a small force of Australian Special Forces soldiers prevailed over a numerically superior Taliban life group. The fight saw a battle honour awarded to the SASR and 2nd Commando Regiment, and a Victoria Cross awarded to Ben. Words like exceptional and remarkable don’t do justice to Ben’s story. Partly because of his actions and those of his mates that day, but also because of the life lessons that he draws on and shares from that extraordinary fight. The true meaning of leadership, moral vs physical courage, honour, duty and steadfast commitment are all part of what our guests took away from the lunch. The standing ovation for Ben and the relevance of his message said it all. Well done and thanks mate.

Our great supporter and friend, artist Laura Douglas displayed her latest work ‘Warhorse’, which she has donated for fundraising. A brief glance at Laura’s website shows the quality of her work and the extent of her artistic credentials. In the coming months, we will find ‘Warhorse’ a suitable new owner. You?

Our COO Mick Donaldson, in his inimical SAS style, introduced the Corporate Warrior Challenge. Teasing prospective starters with promises of being their ‘mentor and tormentor’, Mick explained that the CWC is based on ‘Lucky Dip’ – an ironically titled phase of SAS selection. A number of corporates and individuals have already signed up, showing that our supporters don’t scare easily. Mick is Chief Adventurer for TAG, the company that will run the event in early 2017. Get in early!

Our Chairman Terry Nolan and CEO Bob Brett spoke of the evolution of Wandering Warriors and our plans for mentoring, education, employment and other services. Both thanked all for making Wandering Warriors an increasingly key player in the ex-service community. Special thanks and presentations went to the Ray White Group, to Ray White Oxenford/Helensvale, to the UQ Business School, Grant Thornton, McCullough Robertson, and to Agri Labour. Channel 7’s Bill McDonald gave a performance that showed why he is sought after as an MC.

Major Graham Palmer and the men of 7 Brigade were there, backing us as they have done from our earliest days. The Bushmaster they brought to town was a welcome and significant draw card. Special thanks as always goes to all who do the background work that makes these events happen: to Tracey O’Brien from mi graphics and to Carol Podesta and her Class Act Event Services. But first, last and always, we thank you, the supporters who allow us the privilege to serve our veterans and their families.

To see photographs of the days event please click here.