The Prince and the mousepad 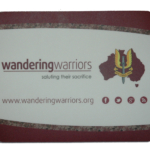 When Prince Frederik from Denmark visited Brisbane in August, he received royal hospitality from Health & Hearing founder Soren Nielsen, who also happens to be Queensland’s Honorary Consul for Denmark.

Soren tells us the prince is a great down-to-earth guy. As they toured Brisbane, Prince Frederik noticed and made mention of something in Soren’s car: a Wandering Warriors mousepad.

Turns out that the prince is a great supporter of veterans’ causes. Soren immediately made a gift of the mousepad to the prince, and it now occupies a place next to the royal computer. So if you own one of our mousepads, you can say that it’s ‘as used by the future King of Denmark!’