Special Operations Task Group V: Remembers Luke Worsley- let’s all think about what it means to be Australian

We at Wandering Warriors are asked all the time by members of the public for insights into what our troops are experiencing on operations. This story by Darren Peters involves death on operations. It’s a tough but noble story that some will hopefully find uplifting. We greatly appreciate guys like Darren Peters who are willing to share their stories, and who believe their fellow Australians have a right to know. 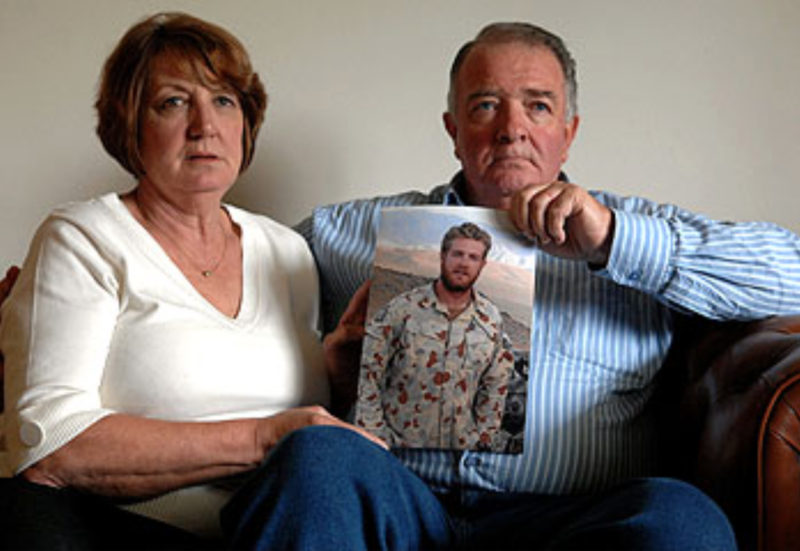 (Marjorie and John Worsley with a photo of their son the late Luke Worsley, killed in action 23 November 2007 in Australia’s war against Islamic terrorists in Afghanistan.)

The 23rd of November has just passed. For some it’s just another day. Unfortunately for others it is not. I was there on the ground that day when one of our finest, Luke Worsley from 4 RAR Commando, was knocked. We were out in the middle of the Afghanistan Dasht and a long way from Australia.

This story from within the SF community needs to be told to the Australian public but most of all the parents, wives, sons daughters and family.

What the boys from Bravo Company 4 RAR (now 2 Commando Regiment), Special Operations Task Group (SOTG) rotation V (Roman numeral for 5), did for one of their own over an 18 hour plus period is something I will never forget. His mates did everything they could for him and then some.

We harboured up the vehicles, created the Vehicle Drop off Point (VDO) and the decision was made to move in on foot. Harbouring the vehicles was no easy feat as there were Land Rover SRVs, 4 and 6 wheel All-terrain Vehicles, Bushmasters and the Mother Ship.

The Mother Ship was an up armoured 4 x 4 Mercedes Unimog that looks like something out of Mad Max. It had a pintle mounted 50cal HMG mounted on top and a 7.62 Mag58 LMG mounted for the passenger.

The boys took off around dusk and started the stomp of about 3km (3.5hrs) over the mountainous terrain to the objective. Overwatch was established over the village, and the boys went in. All seemed to be going well until the call of TIC (Troops in Contact) came over the radio. Echoes of rifle and intense machine gun fire could be heard across the valley.

Then we heard the words that no one wants to hear. Just after midnight on the 22nd and going in to the early morning of 23rd November, I can remember hearing over the radio that we had a man down. All of us who were listening to the contact over the radio couldn’t believe it, we were waiting to hear who it was. The call sign of the soldier was sent over the radio and eventually we worked out it was Luke .

We were in our harbour securing the vehicles, a few of us started to prepare to roll in and give them a hand. We could still hear the heavy fighting going on. Thankfully the boss made the call not to send us forward as we found out later on that the vehicle route in to the village had been mined with IEDs.

The boys had been on target for about 8 plus hours and dawn was not that far away. So the call was made to move out and that they would have to stretcher carry Luke back to the VDO some 3km away.

This paragraph I’m trying to give you some idea of the mind set and some of the setbacks the boys faced and overcame.

Choppers were called in to come and pick up Luke. The Chinook, along with Gunship support, had to come from TK Airfield and were provided by the Dutch. They were requested to pick Luke from the village and take them back to TK Airfield for processing. As it turned out, we were told the chopper was on its way from TK.

Then the call came over the radio informing us it was being diverted to Forward Operating Base (FOB) Anaconda for another task. We were then told it was not coming directly to us from FOB Anaconda but now diverted to Kandahar. Once again we were then informed that the chopper did not have enough fuel to come to us from Kandahar, so it returned to TK airfield then finally on to our location.

Back to the story:

I can remember standing there listening to the Company who were coming back, calling in and updating their position. Once we knew they were about 20 to 30 minutes out from the VDO, I told every spare body to go around to the vehicles, dig out the gas bottles and stove and boil some water. This was so they would have hot water for a brew when they returned.

Then I saw the first of two things that day that I wish every Australian could have seen.

I can remember looking up and seeing the first member of the Company coming over the hill, then another and another. Then the rest of the boys who were carrying Luke on the stretcher.

Every man wanted to carry Luke. They had been at it for over 12 hours by now, they were all tired and they were hurt, but in true Grunt fashion they were not bloody beaten and at no time would they give up. At that very moment I was thinking, how proud I was to be there. I just witnessed something un-bloody believable.

Before Luke was to be taken off the battlefield by chopper, he was placed in one of the Bushmasters. Everyone from the Company had the opportunity to go in, pay their respects and say goodbye, which they all did. Me personally, I held his hand and said a prayer Psalm 23:4 (Even though I walk through the valley of the shadow of death, I will fear no evil, for you are with me; your rod and your staff, they comfort me). I also told him that one day we will all be reunited in Valhalla and that he would not be forgotten.

In addition to this there was a young Mortarman. He was one of the boys that had just been out all night. He helped carry and was good friends with Luke. Unfortunately he could not bring himself to go in to the Bushmaster and say good bye. I tried to convince him at the time that it was the right thing to do; however, he still could not bring himself to do it. I said to him that I completely understand. 30 minutes later at around 9 or 10ish we received the call that the evac chopper was inbound.

Finally, we could hear the sound of the Chinook off in the distance. At this point I picked myself up and went over to where the Mortars were. As I approached him I said, mate this is the last chance you will get to say good bye. He was also religious man so I told him, this is the last chance to go in and say a prayer for him. To his credit we both walked to the Bushmaster together and I told him I would be right outside. He went in and farewelled his mate. Once we were back in Camp Russell, he came up to me and thanked me for what I had done.

So we loaded Luke on to the Chinook and made sure everything was good to go. This is where I saw the second thing that the Australian public should know about.

I was facing the chinook with the company spread out behind me in the defensive position. The position was spread out over approximately 500m on a slight hill that was running up from where we were. The CSM pointed behind me and said “hey DAZZ have a look at that.” I turned around and this is what I saw.

I looked up and I could see the whole company, all standing to attention. They were next to their cars, some were standing by themselves, some were standing on Bushmasters, this was truly an amazing site. These boys were paying their respect to a mate that they would never see again but would live on in their memories.

On our return to Camp Russell we had a service and we were allowed a few beers. We were all in the building which is normally used as a recreation room and one of the blokes, whose name I cannot recall, played the Dire Straits song Brothers In Arms. Every one stopped what they were doing and there was complete silence. Everyone banded together and paid their respect to Luke in their own way.

Once the Dire Straits song was finished a young man grabbed his guitar and went up the front of the recreation room. He was a strapping young lad who was already a legend within Bravo Company and 4RAR (2 Commando Regiment).

Now you have to remember that this is in November of 2007.

This man and his guitar started to play a song, a song that, funnily enough, still haunts me today.

The song was “I hope you had the time of your life”, by Green Day. It was a pretty good rendition of the song that would give any musician a run for their money.

The man with the guitar was Cameron Baird VC MG and he is the 100th recipient of the Victoria Cross. A man truly worthy of this honour.

The same spirit that the ANZACs took with them to the shores of Gallipoli is still alive and well today. Up until now this story of the boys was just a personal memory that now will be hopefully told to the Australian public, but most of all the parents of these brave young lads.

Anyone who reads this can share it as much as possible. Cheers