Tony Cicchiello, owner of Ray White Clayfield is the generous soul who paid $5,200 at the Ray White Awards Night auction for the framed action shot from Afghanistan signed by Ben Roberts-Smith VC, MG.

We were delighted to meet Tony, to accept his cheque and thank him personally for his contribution. We hope it brings years of good karma for Tony and his Clayfield office. Clint Hynes of Ray White Oxenford took the photo in Afghanistan, paid for the mounting and then donated it for the auction.

Clint was on hand to talk about the photo with his Clayfield colleague. Huge thanks guys, such big hearts! 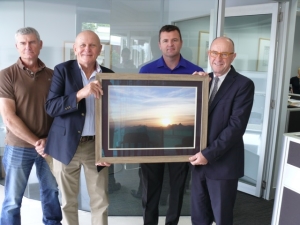